What people say about it

“To be honest, I went to the Mark Drama doubting how good it would be. I left in no doubt that it is absolutely outstanding. It is a powerful, fast-paced and accurate retelling of the Gospel. You leave really contemplating not the acting, but the Word! I commend it to churches to use as evangelistic outreach or to train and teach the church family from the Gospel of Mark.”
– Jonathan Carswell, Director, http://www.10ofthose.com

“I don’t know what I was expecting of The Mark Drama, but it wasn’t this. After years of hearing about a performance – part recitation, part summary – of the gospel of Mark doing the rounds in Europe, it was exciting to be in the audience tonight for the Australian debut. Yet primarily it shocked and unsettled me, house lights up for most of the performance, no place to hide unbidden emotion.” Read more at Laura’s blog.

Eternity Magazine also reported on Australia’s debut production of the Mark Drama at The Village Church, Annandale in September 2014. Read the promo here, and the review here.

“In the brightest lit of rooms, you meet Jesus. You hear the words he spoke, said by others but you know they are his words. And you sit there, in the audience, and you pinch yourself, because 2000 years ago these things unfolded like this. Something like this. And here, you get a glimpse of what it may have been like.” Read the rest of Laura’s review of the 2015 Moore College production.

“I was struck by how effective the Mark Drama is. It gives a clear and complete gospel message to secular, post-Christian friends and family. Drama as a medium, provides a great vehicle for presenting the whole story of Jesus in all its rawness, complexity and beauty.”
– Carl Matthei, Senior Minister of Campus Bible Study

“Hosting the Mark Drama was a terrific experience at The Village Church. We will be doing it again!”
– Dominic Steele, Senior Minister of the Village Church, Annandale
.
“It’s like the difference between standard definition TV and a fully immersive IMAX 3D experience.” – William Quach, MBM Rooty Hill
.
“The dramatic form portrays well many of the features of the text of the Gospel: the urgency of being part of God’s kingdom, the humorous puzzlement of the disciples, the tragedy of rejection, and above all the power and passion of Jesus Christ himself, climaxing in his death “as a ransom for many”. The Mark Drama is suitable for a wide range of audiences. I’m hoping to bring more people to see it next time it’s on!”
– Lionel Windsor, New Testament lecturer, Moore Theological College

From across the world

“It is an excellent easy-invite, non-cringe evangelistic event for non-Christians. It’s also a really inspiring way for Christians to experience the power of Mark’s gospel freshly.”
– Vaughan Roberts, Rector of St Ebbes, Oxford, and Director of The Proclamation Trust

“The Mark Drama allows the words of the bible to speak for itself – the Word does the work – and in The Mark Drama many participants join together to spread the Word… It is so easy to invite friends along!”
– Revd Gareth Lewis, Senior Minister, Christchurch Harpenden

“Astonishingly powerful, moving, you could hear a pin drop.” Words almost never used of an amateur production, but words that are frequently – and entirely appropriately – used to describe productions of the Mark Drama. It is a profoundly stirring evening of reflection on the person of Jesus Christ as told through the eyes of the Gospel writer Mark. I can’t recommend it highly enough as a window on the greatest story about the greatest person.”
– Marcus Honeysett, Director of Living Leadership 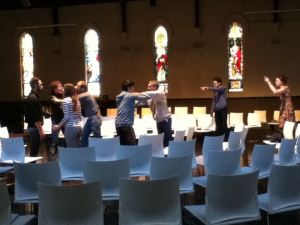 “Because its script is simply the Gospel of Mark, every moment of the Mark Drama captivates both audience and performer in a way that only His Word can. Its content is as deep as its appeal is wide.”
– Matt Johnson, Director of Music and Worship Arts, Garber United Methodist Church, New Bern, USA

“When I look through my notes of all the outreach events we’ve done in the last few years, only against The Mark Drama have I written, ‘Must repeat’.”
– Richard Fairbairn, Assistant Pastor, Kennet Valley Free Church, Reading

“I wish I could do the Mark Drama every weekend! How incredible to spend two days totally focused on Jesus, living his story and feeling what it would have been like to be there. What a privilege to share this powerful experience with a room full of people. And to say – Look! Listen! What could this story mean to you? What will it take for you to believe?”
– Sue Lynn, West Ryde Anglican

“I didn’t expect acting in the Mark Drama to grow my faith as much as it did. Being part of the mob, calling out for Jesus to be crucified, laughing as he was beaten and mocked… It made me see the depth of my own sin and left me so thankful that Jesus went to the cross.”
– Katie Day, St Luke’s Anglican, Liverpool

“Seeing God’s living and active word acted out is something amazing! You really feel the impact Jesus had – his sheer power over nature, his authority in speech, his humanity and emotions… Everyone thoroughly enjoyed it and was challenged by it. Some people even took a copy of Mark’s gospel and joined a church! It’s amazing to see!”
– Jing Jiao, Macquarie Uni Christian Union 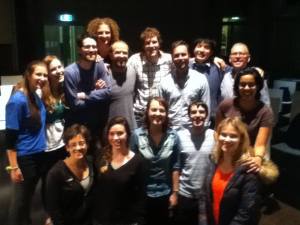 “What struck me was a greater appreciation of the range of emotions Jesus experienced as time and time again he faced hard hearts, believing hearts, confused disciples, presumptuous individuals and even betrayal by his closest friends. Despite all of this, it was incredible to witness Jesus’ resolve to go to the cross.”
– William Quach, MBM Rooty Hill

“As an actor I was able to more carefully consider the impact Jesus had on the people he met. I felt this acutely in my portrayal of the bleeding woman. This woman was shunned and helpless for 12 years and then freed instantly by Jesus! I had to dig deeper into the gospel to bring this to life and I was moved anew by the power and compassion Jesus displayed.”
– Christine Branson, Fairfield Anglican

“Acting out Peter, being so close to Jesus, then rejecting him, and then being called by name after his resurrection, I could see Jesus’ forgiveness at work in him, but also powerfully in me too.”
– Rohan Smith, Naremburn Cammeray Anglican Church

“It took some persuading to get our church on board with The Mark Drama. Lots of people, including the actors we corralled, were sceptical. ‘You mean there’s no script? No props or costumes? And just three rehearsals??’ But, when the actors started rehearsing they quickly morphed from a motley crew into a committed team intent on telling Jesus’ story. Lots of us brought friends and family who wouldn’t normally come near church, and had valuable conversations. It was a huge buzz! We’re still talking about it! I won’t pretend it’s not hard work – it is, like most things worth doing. But we definitely plan to do it again!”
– Margaret Rumbold, Producer at Gladesville Anglican Church

Mark Drama Australia coordinates the productions of the Mark Drama across Australia. The Mark Drama is a 90 minute theatre-in-the-round performance of the life of Jesus, as recorded in the Bible by Mark. Beginning in England by Andrew Page, the show has been performed right across Europe and throughout the world.